The well-attended Town of Creston council meeting saw a degree of conflict yesterday.

The motion to move forward with plans for the new fire hall technical building committee was interrupted by councillor Ellen Tzakis.

Just as the motion was seconded, Tzakis intervened and asked if the motion could instead be “tabled.”

She then brought up figures from the Osoyoos Firehall which was built over-budget, compared costs per square footage and suggested hiring a local contractor.

Chief administrative officer Mike Moore explained to Tzakis that bypassing steps such as forming the building committee and hiring an architect would be impossible due to the strict code the Fire hall would have to follow.

Mayor Ron Toyota allowed Tzakis the motion to hold off on forming the building committee, however, it was not seconded and the motion died.

Plans for the Fire Hall will now move forward, with Tzakis being the lone vote against the motion. 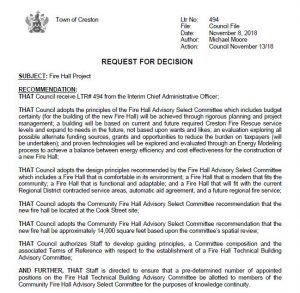 (this is a partial copy of page 1 of 3 of the entire recomendation) Full details and minutes may be found at creston.ca