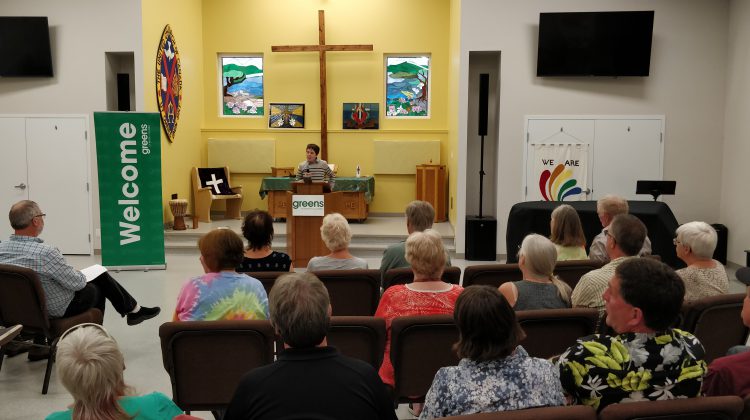 Creston locals voiced their need for public transportation at the community forum hosted by the BC Green party on July 9, 2019.

Green Deputy Leader Sonia Furstenau invited members of the gallery, of which there were roughly 50, to speak their mind.

“There’s nothing from Nelson to the Alberta border,” One Creston local brought transportation by bus. “We need to get to Calgary and Edmonton. If you want to get to Vancouver, it’s not possible actually because you need to drive to Nelson first, and then where are you going to leave your car?”

Another local gave a description of his journey to Edmonton, having to drive to Cranbrook to find a bus that would go to Calgary and then Edmonton over a lengthy schedule that spans over 24 hours. He also criticized the price of flights from the Cranbrook Airport to Calgary and Edmonton as well as the routes, which involve layovers in Vancouver.

“Why am I flying to Vancouver and then to Calgary to get to Edmonton?” He asked.

Nelson City Councilor Rik Logtenberg who was also in attendance in support of the Green Party suggested locals look into Kootenay Ride Share for the time being.

Another member of the gallery iterated the need for more frequent buses to Cranbrook for medical reasons. Though there is a Tuesday 8:30 am service from Creston to Cranbrook through BC transit, the general consensus from the gallery was that more trips are needed.

A few private bus companies are slowly filling the gaps in the Kootenays left behind after the departure of Greyhound. Not every market is stepping up though,  leaving many stranded in communities like Creston.

Meanwhile, some progress is being made according to Logtenberg.

“The West Kootenay Transit Committee is a new committee that’s working with BC Transit, working with Nelson Transit and the RDCK to create an effective link throughout the West Kootenays. Just today [July 9] we talked about the link on the East Shore [Kootenay Lake] coming potentially as far down as Creston.”

Logtenberg outlined the importance of having locals be vocal to their area directors in order to push transportation up the priority list. Furstenau encouraged the gallery to have a “champion at the table.”

According to Furstenau, once a solution or many solutions are found, it is up to the area directors to go to the Province to secure funding.

“We Want to be leaning into these solutions,” Furstenau said. “They are the low hanging fruit. You want to be reducing emissions? You get better public transportation.”