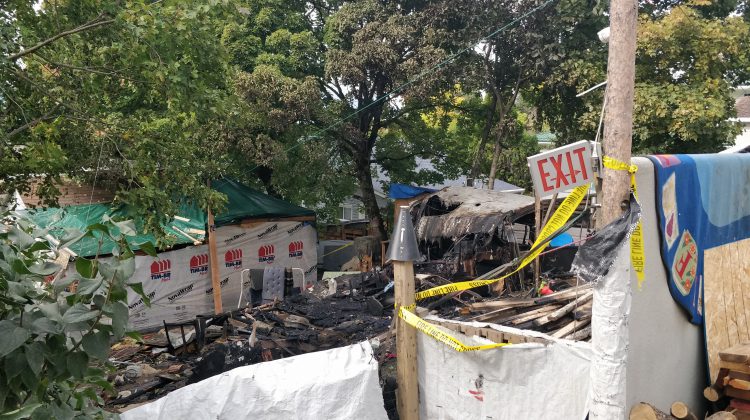 The main property was saved, but the trailer in in ruin following the fire. (Jensen Shields, mycrestonnow.com)

Creston Fire Rescue arrived at 422 10th Avenue North shortly after to suppress the blaze. Assistant Fire Chief Jared Riel was on the scene.

“When we got there, it turned out that it was a travel trailer in the back yard that started on fire, which is typical with these kinds of fires with travel trailers or vehicles, there’s an explosion, usually you see propane tanks or the tires or other systems within RV units.”

“That’s what was happening, as the fire was burning there were some bottles that would heat up and that caused the explosion, which was a really loud bang heard across most of the town. There was no fire ball or anything like that.”

As for the specific cause, it has yet to be determined.

“We’re not 100% percent sure what it was. It popped off. It exploded and there was no fire ball associated with it. The danger there, the hazard there were those compressed gas cylinders.”

Riel says the investigation isn’t over and that it will be conducted by Creston Fire rescue.

“We’re going to be doing this investigation to determine things. Based on reports there were some oxygen cylinders near there, but we haven’t confirmed that yet. We’re trying to get that investigation done.”

“Everything we saw there, we looked and everything and there’s nothing to investigate. There was no criminality, we didn’t take anything over.”

No injuries were reported and the occupants of the property got out safely according to Riel.