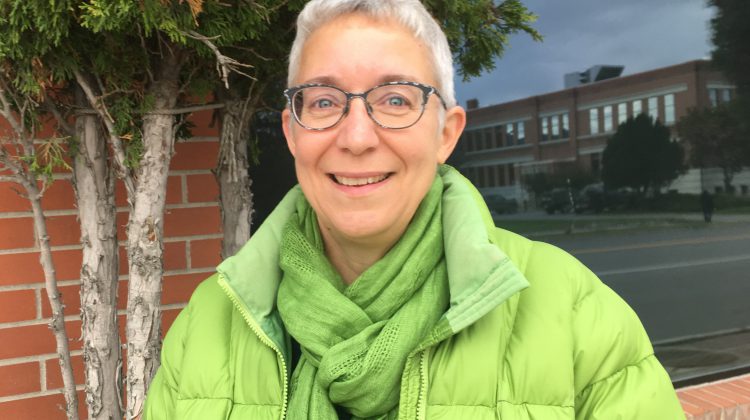 Abra Brynne is representing the Green Party in Kootenay-Columbia for the 2019 federal election on October 21st. (Bradley Jones, MyEastKootenayNow.com staff)

*With files from Bradley Jones, Myeastkootenaynow.com*

Abra Brynne is looking to make history in Kootenay-Columbia this federal election, and become the first Green Party representative to ever win in the riding, with a particular focus on climate change, reconciliation, and electoral reform.

Living in the riding since 1990, primarily in Nelson, Brynne’s focus over the last 30 years has been in agriculture and food systems consulting, as well as building sustainable communities by working alongside non-profits and local businesses, and serving as Chair of the West Kootenay Women’s Association.

“I’ve been an activist working with all levels of government for a long time now and I want to get on the other side of the desk and be part of the decision making in Ottawa as a result of my very sincere and deep concerns about the climate crisis,” Brynne told MyEastKootenayNow.com. “I really feel like the next generations are calling us as adults to take action, to not just talk, not just plan, not just ask for more reports, but actually to create the change that’s going to avert the climate catastrophe that I think is very real.”

Brynne said the Green Party has a full party platform, that doesn’t just focus on the environment and climate change but also key social issues and economics.

One of Brynne’s other top priorities, if elected, is coming to reconciliation with the past.

“True reconciliation with Indigenous people, with the first peoples of this place that has come to be called Canada. I think that’s important, it has to be real, we have to recognize rights and title and we have to take leadership from the Indigenous people.”

Concerned for communities and wanting to see thriving local businesses and non-profit organizations around the riding, Brynne said electoral reform is another point of interest for her and the Green Party in the 2019 federal election.

“I think we’ve seen a lot of problems in how politics, as usual, has been happening for quite some time,” Brynne told MyEastKootenayNow.com. “We need to ensure that people all have a voice and can genuinely represent their riding. We need to have proportional representation in place so that every single vote is a vote from people’s hearts and it’s going to have representation around the tables of government.”

Another big change to the electoral system that the Green Party advocates for is lowering the voting age to 16.

“There’s a lot of really great teachers in our high schools that are teaching our children a lot more nuance about government,voting and democracy than many of us as adults benefited from in past years in school. The combination of our children being educated on what democracy is and how we benefit from it, that means we’ll have a bunch of educated voters participating in our democracy.”

Having worked in the past with agricultural producers, Brynne said she believes in supply management.

“I’m very disturbed by the fact that the successive previous government has given away quota. Have enabled other countries to take access of some of our dairy supply and the result is not just what it has reduced the volume of milk available for our milk producers, but it has introduced a level of uncertainty into their return for their work and their effort that makes it really hard for them to plan.”

Brynne also suggests a change in structure in the agriculture sector; the implementation of an apprenticeship program, much like the “Red Seal” seen in other trades to educate and support new farmers.

Tipping her hat to the young people, Brynne said her campaign is full of 14, 15, and 16-year-old volunteers that are wanting to see change and impact on the climate crisis, believing it’s time that Canada takes a cue from their leadership and example and represent the riding.

“As someone who really tries hard to understand the nature of our communities and needs here and knows how to advocate with government, knows how to drive policy transition that’s going to produce better public policy, I think that I am well suited to represent the riding.”

Abra Brynne is just one of six candidates that are running in Kootenay-Columbia, as Rob Morrison of the Conservatives, Wayne Stetski of the NDP, Robin Goldsbury for the Liberals, Rick Stewart from the People’s Party of Canada, and Trev Miller for the Animal Protection Party are all hoping to be elected.

Voters head to the polls on October 21, 2019, to elect their next Member of Parliament and their next federal government.

The Creston Valley Chamber of commerce is hosting an All Federal Candidates Forum in Creston on October 16th.