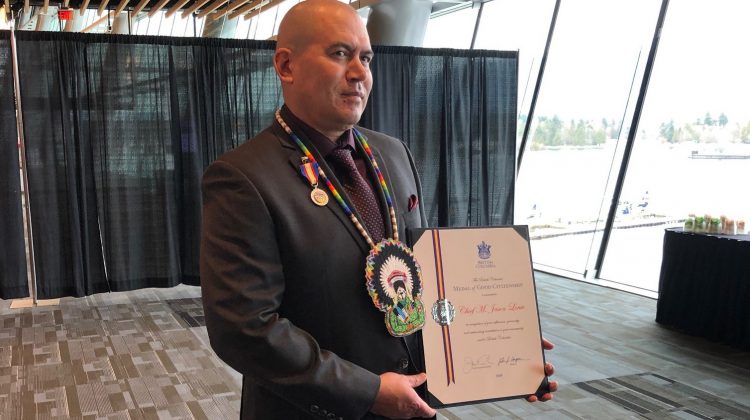 The Province awarded key members of the Kootenay Community the Medal of Good Citizenship. 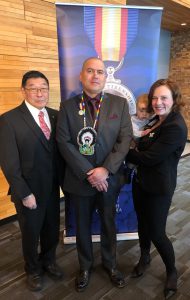 He was joined with his family on November 5, 2019 for the ceremony in Vancouver. Mayor Ron Toyota and Nelson-Creston MLA Michelle Mungall were also in attendance.

“Her and the mayor were there to support my family. My wife and my two daughters from Seattle came over and it was just really good to have support from my loved ones and the people that I believe were instrumental in the nomination.”

In  humble fashion, Chief Louie thanked the all of those who support him.

“It takes teamwork. None of this could be accomplished by me, myself. i have a Council that I work with and administration team and they work very hard. I’m just one of the members of the team.”

All recipients must be nominated by letter, followed by numerous letters of support. But it was Ron Toyota who initiated the nomination process.

In his letter to the The Medal of Good Citizenship Selection Committee he wrote:

Chief Jason Louie was first elected as Chief of the Lower Kootenay Band in 2010. Currently serving his third term as leader of the Ktunaxa people, he is known as a strong leader dedicated to building an economy where his people are self-sufficient, while retaining harmony with Ktunaxa traditions and values.

Born in Creston, Louie has worked collaboratively to build positive relationships with neighbouring communities and the Regional District of Central Kootenay. Through his commitment and persistence, Louie has developed a friendship between the Ktunaxa people and their neighbours.

Louie’s welcoming policy invites select individuals to share in the experiences and culture of the Lower Kootenay Band to participate alongside him, his family and the Ktunaxa people–in even the most sacred ceremonies.

For over 30 years, Louie has been involved with the Lower Kootenay Band Annual Pow Wow, one of the few remaining Pow Wows in North America. He also organizes and participates in many Ktunaxa youth initiatives and is passionate about preserving the Ktunaxa language.

Louie is well respected for his openness about his personal struggle with PTSD and depression and is a tireless advocate for mental health awareness. He regularly leads traditional ceremonies for First Nation people living with mental illness and addictions.

Louie is known for his open and respectful dialogue between the Lower Kootenay Band, the Town of Creston, the Regional District of Central Kootenay, the RCMP, Canadian and US Border Services and a wide variety of volunteer groups and community service organizations in the Creston Valley.

Louie served his country in the Canadian Armed Forces, Army Reserve, from 2004–2012. In honour of his many contributions and achievements, Louie received the Queen’s Diamond Jubilee Medal, and in 2013 was a recipient of a British Columbia Community Achievement Award.

Under Louie’s leadership the Lower Kootenay Band has made some important acquisitions. In 2015, the Band acquired Ainsworth Hot Springs Resort, bringing traditional lands back into the community and providing local jobs. Through an Incremental Treaty Agreement, the Band has also acquired 475 acres of lakefront property on Kootenay Lake.

Other positive developments under Louie’s leadership include a $1.5 million water system for the Band; construction of a $1.5 million addition to the Yaqan Nukiy school, over $300,000 in renovations to Lower Kootenay Band housing units, construction of a traditional Round House in the Ktunaxa community and a farming program to raise and produce beef for community food stores. Louie has also been a driving force in the development of a health facilities building and an alcohol and drug treatment centre to serve the Lower Kootenay Band.

Above all, Chief Louie is passionate about creating a future in which the Lower Kootenay Band become equal citizens, in a province and country that includes and recognizes First Nations Peoples as autonomous neighbours, within the traditional lands that we all call home.

For the full list of the most recent recipients of this prestigious award, follow this link to www2.gov.bc.ca.