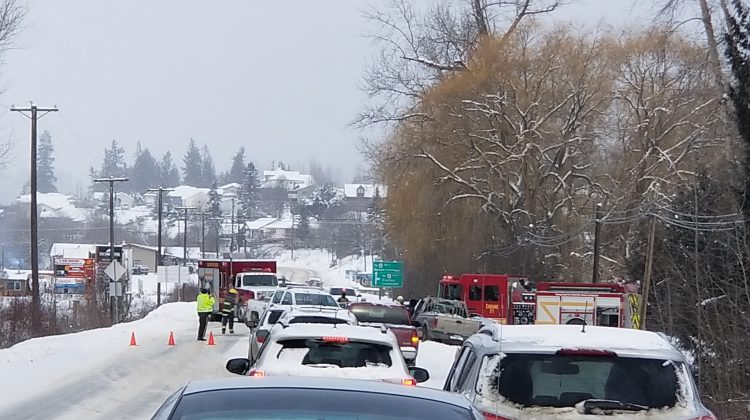 “Three people were involved. Two were transported to hospital,” said Riel. “RCMP was there, BC Ambulance, paramedics dealt with the patients. Highways representatives showed up as well.”

CFR report the road was cleared of debris and hazardous fuel shortly after 2:00 P.M.

Later that evening close to 5:00 P.M, crews were sent out again, but this time to deal with a collision between a truck and a semi trailer on Highway 3 near the Goatfell Forest Service Rd. CFR attended along with local RCMP, BC Ambulance and the Yahk Fire Department.

“The two people in the pickup truck, one of them was able to get out. The other one needed to be extricated using the jaws of life.” Said Riel.

Both occupants were assessed by paramedics and immediately sent to hospital. Their condition has yet to be shared with the public.

Shockingly, while on route, another accident was discovered close by.

“The second accident which was at the bottom of the hill, two vehicles, they just slid off. No injuries there. We stopped and just checked on them. They needed a tow truck to get out.” Said Riel.

One major factor played a role in all of the accidents that day; Icy and slippery roads.

Both in Creston and along Highway 3, conditions are dangerous and should be approached with caution according to Riel.

“The conditions are really tough for plowing or even keeping sand on there. it seems like there is at least an ice inch of hard packed snow and ice on the road.”