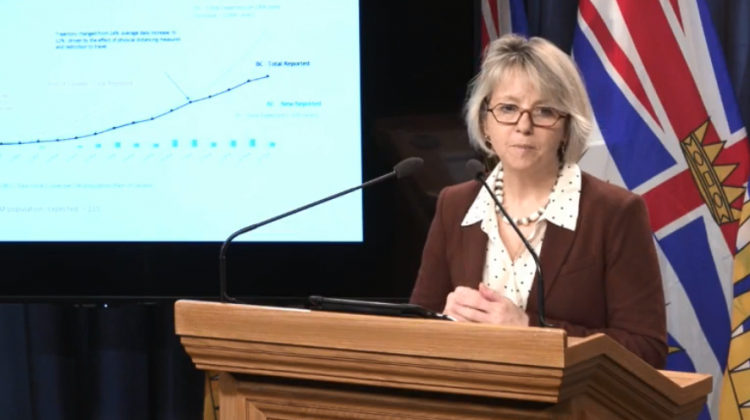 In a briefing to the public, Provincial Health Officer Dr. Bonnie Henry offered clarification on epidemiological modelling within B.C. in comparison to other parts of Canada and around the world.

Henry explained that B.C. and Canada have seen a comparatively slower spread of COVID-19 than other countries.

“The lines for Spain and Italy, Norway, Germany, some of the other countries have started to dramatically increase usually around day seven or eight,” said Henry. ” What we’re seeing in B.C. and Canada, is that line has stayed relatively low, but it is, of course, starting to increase.”

Henry said that a trend of flattening numbers has been seen in South Korea, and that is what she hopes to see out of Canada as well.

The focus of testing has shifted to the community, hospitals, long-term care centres and healthcare workers, where outbreaks can spread quickly and take out workers and health facilities. Henry said that 3,000 tests have been done a day, comparable to testing strategies in Singapore and South Korea.

According to Dr. Henry, around the middle of March, when travel restrictions, physical distancing and other measures were being put in place, that was because health authorities were starting to see COVID-19 transmission not related to travel.

“With these important measures that we’ve put in place, what people need to pay attention to is that we’re going to start to see the impact of those in the coming week to two weeks,” said Henry. “I don’t want to over-call it, but I do believe we’re seeing a flattening, or a falling off of that curve.”

Henry once again emphasized the importance of heeding the measures and advice put in place to stop the transmission of the virus where possible.