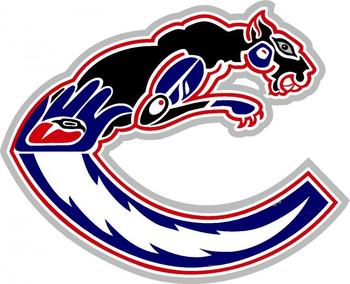 The Creston Valley Thunder Cats opened their season with a 5-2 loss to the Columbia Valley Rockies at Invermere’s Eddie Mountain Memorial Arena.

Vin Jackson and Eric Van Loon each scored for Creston while Jaden Little turned aside 43 shots for a .896 SV%

Outshooting the Thunder Cats 48-38, the Rockies had five different goal scorers in the win, while Noah Decottignies made 36 stops for the first win of his KIJHL career. AJ Belanger, Palmer Sinclair, Brady Dovichak, Adam Berthiaume, and Dylan Malarchuk all lit the lamp in the home opener.

Creston would look to rebound on Saturday night on home ice at the Johnny Bucyk Arena but the Rockies once again skated to a 4-2 win.

Both teams tested their keepers with back to back hames as Decottignies made 14 stops for the win, while Little turned aside 25 of 28 for the Thunder Cats earning a .893 SV%

There would be no split in the weekend the back-to-back matchups between the Kimberley Dynamiters and the Fernie Ghost Riders.

Fernie opened their season with a 4-3 overtime victory Friday night at the Kimberley Civic Centre. The second game, this time at the Fernie Memorial Arena, proved to be much messier with 146 total penalty minutes including 11 misconducts. The score was 4-3 once more for the Ghost Riders, though no overtime was needed.

The winless Thunder Cats will battle the winless Dynamiters in a second home-and-home series as those games drop at 7:30 pm from the Kimberley Civic Centre on Friday and Creston’s Johnny Bucyk Arena on Saturday.

On Friday, the Leafs won the first game of the season on the road in convincing fashion, beating the Rebels 10-3. Defenceman Ethan McLaughlin recorded a hat trick and also added an assist. Second-year Leafs goalie Tenzin Mint stopped 17 of 20 shots for a .85 SV% record.

The Leafs had their home opener on Saturday, hosting the Osoyoos Coyotes. The game went down to the wire as the Leafs were able to squeak out a narrow 4-3 victory in overtime. Simon Nemethy was the overtime hero, notching his first goal of the season. Mint picked up his second win of the season, getting the start in goal for both opening games.

Meanwhile, following their blowout loss on Friday, the Rebels were able to turn it around to end the weekend with a 5-3 over the Grand Forks Border Bruins.

Justin Duguay scored two goals in the game, giving him three to start the season while Jordan Adams was also able to find the back of the net twice for his first two goals of the year.

Next up is a road trip weekend for the Rebels as they now travel to Osoyoos on Friday for their first matchup of the season. On Saturday, the team is back on the road for a rematch against the Grand Forks Border Bruins.

Nelson will look to remain perfect this upcoming weekend when they welcome the winless Grand Forks Border Bruins to the NDCC on Friday. On Saturday, the Leafs will then travel to Osoyoos for a rematch with the Coyotes.

You can watch all the games with a subscription to HockeyTV.

Next round of Columbia River Treaty negotiations being held this week

Next round of Columbia River Treaty negotiations being held this week

Construction to begin on Market Park

Fire risk to shift from north to south: BC Wildfire Service