Kootenay Lake Ferry construction to begin this spring in Nelson 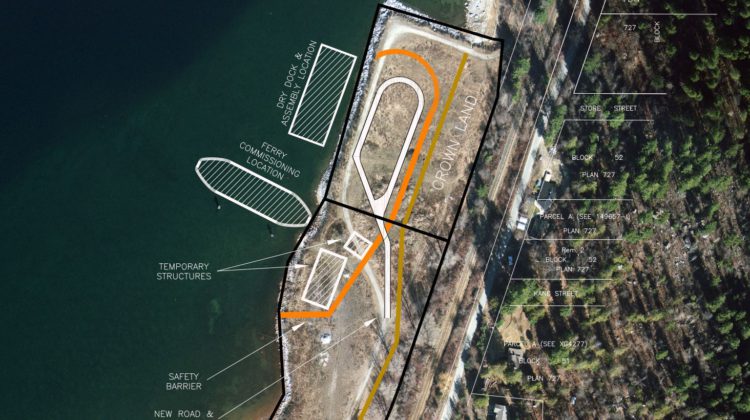 “This is a positive step forward for the community and I am looking forward to seeing this project take shape,” said Mayor John Dooley following the February 9, 2021 vote. “Positive not only for our community but the surrounding area as well.”

Concerns were brought to Western Pacific Marine regarding the $63 million project, including transportation, noise pollution and why the site was chosen over others.

Peter Ward of Ward Engineering said the construction area just east of the Big Orange Bridge was given the green light rather than the transfer station deeper into the west arm of Kootenay Lake.

“The water level over there is just too shallow to construct the ferry with a crane and drydock,” said Ward. “Then there’s the challenge of getting the [new ferry] under the bridge once it is constructed.”

As for noise pollution, construction must adhere to the City’s existing bylaws which means nothing after 10:00 p.m. Western Pacific Marine representative Craig Jackson assured Council that work hours would lie within the range of  7:00 a.m. to 6:00 p.m. Monday through Saturday.

Should these conditions be ignored the City could revoke the construction permit.

Councillor Rik Logtenberg addressed the increased traffic that will be a byproduct of the development and asked Ward to consider adopting a plan to curb emissions and congestion.

“I just want to emphasize, there is a new transportation corridor for active transportation coming in there,” said Logtenber. “If you can make an extra effort to just pay attention to how traffic is flowing, using carpooling, walking, biking. If you have a lot of people staying at the hotel they could endeavour to bike to work that would help a lot.”

With that, a transportation plan is being considered to accommodate roughly 40 to 60 workers coming and going through the Fourth Street rail crossing access point.

Replacing the almost seven-decade-old MV Balfour, the ferry will be built on the very same site the Osprey 2000 was built and launched on July 1st, 2000.

However, much has changed over the past 20 years, explained Councillor Keith Page. He and other Council members said they took into account the letters they received not in support of the chosen site.

“One of the things I think we need to consider with the population and the residents who are down there for the next two years is the legacy of the project. There’s an inconvenience. There’s an impact. It’s not residential construction, it’s commercial, industrial,” said Page. “The opportunity and benefits of having some legacy work left behind, be it the dredging of the mouth of that creek and the potential remediation and shoreline work and improvements to the pedestrian bridge down there, should not be discounted.”

Councillor Jesse Woodward added that the area in question was already a likely candidate for an industrial project that has since been tabled. He then outlined some of the positive economic impacts the project will bring.

“In terms of employment in a time when people really need employment because of the pandemic, people are going to get experience building an electric-ready ferry,” said Woodward. “There will be spin-off, with people spending money. I know there are concerns, I have read all the letters. But there are a lot of positives.”

Construction is to begin this spring and completed by autumn of next year. The new ferry is expected to be fully electric by 2030 with a charging station at the Balfour terminal.

To view the plans, visit this link to the City of Nelson’s website.