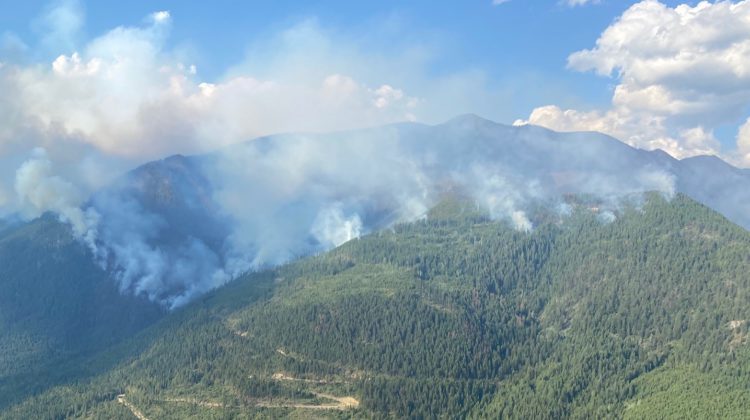 The Akokli Creek fire on July 21, 2021. (Supplied by the BC Wildfire Service)

16 wildfires are active across the East Kootenay and the Creston Valley after one new fire has been discovered northeast of Kimberley, while out of control wildfires continue to grow.

About three kilometres northeast of Kimberley, a 0.1-hectare fire was discovered on Wednesday. The BC Wildfire Service believes it was sparked by a lightning strike.

The Bill Nye Mountain fire, about seven kilometres southeast of Wasa, has grown to about 1,057 hectares. The BC Wildfire Service first reported the lightning-caused blaze on Saturday, July 10th.

An Evacuation Alert has been issued to 53 nearby properties by the Regional District of East Kootenay. The alert applies to both residential and residential properties and recreation campgrounds. Two additional, but unoccupied properties have been put under an Evacuation Order in response to anticipated winds.

Five firefighters, two pieces of heavy equipment and one helicopter are being used to combat the flames.

“Good progress continues to be made on the control lines at the base of the mountain with the project nearly finalized,” said BC Wildfire Service officials.

East of Kootenay Lake, the Akokli Creek fire about seven kilometres east of Boswell has also grown and is estimated to be about 1,369 hectares. The fire was discovered on Friday, July 9th, and is believed to have been caused by a lightning strike.

An Evacuation Alert has been placed on the nearby communities as a result of the fire, along with an area restriction around the fire. Access along the highway and to residential properties is still allowed.

17 firefighters and two helicopters are being used to fight the flames.

“The fire is burning burn in steep and unworkable terrain in the Akokli Drainage. Ground crews are on location building control lines with the assistance of heavy equipment,” said BC Wildfire Service officials. “Additional crews arrived today and they are working hard on developing containment lines. A heavy helicopter was assigned to this incident today and has been actively bucketing the fire.”

The fire can be seen from Boswell, Creston, and surrounding areas, it is also visible to those travelling on Highway 3A.

Out of control fires

On the other side of Kootenay Lake, the Cultus Creek fire continues to burn out of control. It also prompted an Evacuation Alert and an area restriction. It was first discovered on July 2nd and is currently estimated to be 1,825 hectares in size.

To the north, the Carney Creek wildfire is believed to be about 417 hectares after it was discovered on July 11th. The fire is burning in the Purcell Mountains, north of Purcell Wilderness Conservancy Provincial Park.

Another 265 hectares of forest are burning out of control near Kamma Creek, southeast of Kianuko Provincial Park. The fire is in the Moyie Mountain range, northeast of Creston.

A 325-hectare burn is out of control in the Tanglefoot Creek area, about 30 kilometres northeast of Cranbrook. It is believed to have been sparked by lightning and was discovered on Friday, July 16th.

The lightning-caused Redding Creek wildfire, east of Kootenay Lake, is estimated to be about 131 hectares in size after it was first discovered on Sunday, July 11th.

A 58-hectare fire in the Dewar Creek area, about 36 kilometres northwest of Kimberley is continuing to burn out of control after it was discovered on Friday.

In the Ptarmigan Creek area, north of Whiteswan Lake and about 23 kilometres northwest of Canal Flats, a 55-hectare fire is active and is out of control.

Area restrictions have been put in place around the Tanglefoot, Ptarmigan and Dewar Creek wildfires.

Fires being held or under control

Firefighters have gained hold of three wildfires in the region: a two-hectare fire near Sheep Creek, north of Highway 3 between Creston and Salmo, a 0.6-hectare fire near Forsite, along White River and a 26-hectare burn in the Granite Creek area in the Purcell Mountains.

The remaining wildfires across the East Kootenay are under control, including a 29-hectare wildfire in the Moyie River area and the 11-hectare blaze near Big Lake, east of Highway 93, south of Wasa.

The Bear Creek fire is also under control at 1.5 hectares in size.