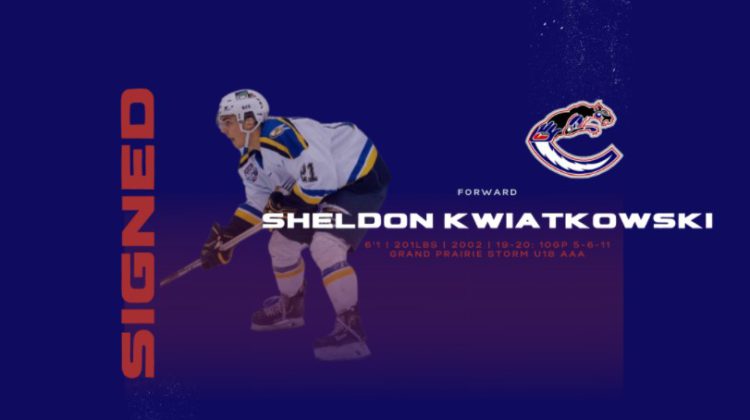 Before that, he split the 2019-20 season with the Grande Prairie Storm U18 AAA and the Fort McMurray Oil Barons of the AJHL, putting up 11 points in 10 games for the Storm and two points in 19 games for the Oil Barrons.

“Sheldon has gone through a lot in his junior hockey career so far. He is passionate, skilled, and he wants to not only contribute but continue to get better and better. That is an invaluable trait,” said Bill Rotheisler, General Manager and Head Coach.

“Sheldon could have played almost anywhere, and his commitment to us, himself, and the sport is something we are excited to bring into our room and our play on the ice. We have high expectations for his time as a Thunder Cat.”

Kwiatkowski said the attitude and the culture of the team sold him and he is excited to start playing.

“Bill and Brandon were great to talk to and had me hooked with their enthusiasm and culture as well as winning and player development,” Kwiatkowski added.

“I believe I bring a lot of passion and compete along with a good sense of hockey IQ. I love to slow the game down when needed and set up plays.”

The Thunder Cats’ first regular-season game will be at the Johnny Bucyk Arena against the Fernie Ghostriders on October 1st.