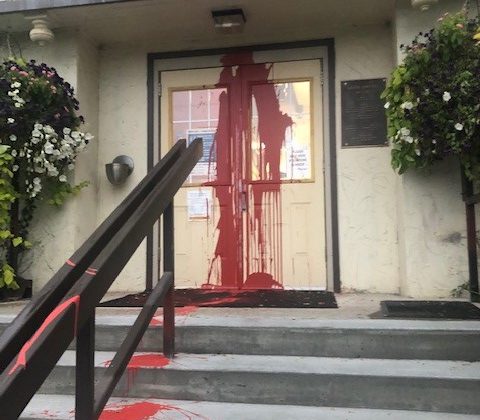 The front entrance to Creston Town Hall, vandalized with red paint. (Supplied by the Town of Creston)

Red paint was thrown on the front doors, steps and railings of Creston’s Town Hall overnight between Sunday and Monday.

Mayor Ron Toyota voiced his frustration with the vandalism.

“This was extremely disappointing to see first thing this morning. Personally, I don’t know how anyone could think that vandalizing a building helps their cause. This simply accomplishes nothing except costing the Town money to clean up and repair the damages,” said Mayor Toyota. “Although we can only speculate what issue the vandal is protesting, the timing coincides with the start of the Provincial Health Officer’s mandate of proof of vaccination to access some events, services and businesses. Even if it is for some other reason, the act of damaging public or private property to express your displeasure is simply a criminal act.”

Town officials said the paint looks like it was cleared up from a distance, but the doors are both stained and damaged.

Earlier in the year, a portion of the front access stairs was replaced, but the new concrete has red stains that likely cannot be removed.

“We feel confident that this damaged isn’t caused by an individual just ‘pulling a prank’ as there is evidence of a more calculated plan to damage our municipal hall”, commented Chief Administrative Officer Michael Moore.