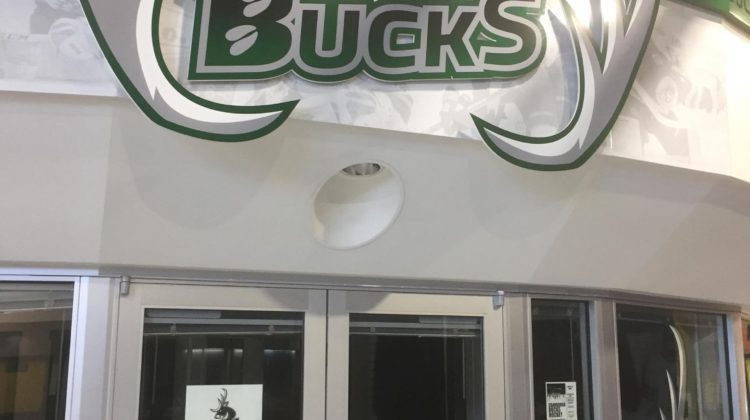 The Cranbrook Bucks swept the Trail Smoke eaters in the BCHL pre-season.

The Bucks’ first exhibition game was on Friday, September 24th, with a 5-3 win in the Cominco Arena in Trail.

It was a slow first period for the Bucks, allowing a goal by defenceman Jordan Hendry and taking two penalties.

In the second period the Buck took control of the game scoring four goals while Trail forward, Brendan Ross scored one goal.

Forwards Nathan Fox, Jarrod Smith, Noah Leibl and defenceman Cole Assailly each put up a tally for the Bucks.

In the third period, Coalson Wolford looked to get Trail back in the mix, but it wasn’t enough as Andrew King brought the Bucks back to a two-goal lead.

Although scoring was out in full force for both teams, it did not come from the powerplay, with the Bucks going 0-5 and the Smoke Eaters going 0-4 on the man advantage.

Bucks goaltender Evan Gartner made 27 saves on 30 shots, while Trail’s goalie, Callum Tung made 20 saves on 23 shots and Cayden Hamming made 15 saves on 17 shots.

Game two of pre-season was back in Cranbrook on Saturday, September 25th.

The second period was the only period with scoring this game, with the Bucks tallying three goals and the Smoke Eaters getting one.

However, it was a good night to be a goalie with Smoke Eater’s netminder saving 35 of 38 shots and Nathan Airey with the Bucks making 40 saves out of 41 shots.

“It’s fantastic, we’ve been such good partners off the ice and obviously enemies on the ice which is great. Seeing the rivalry build and seeing the way they play and the way we play, it’s quite contradicting and contrasting which is cool to watch.”

This wraps up the Bucks pre-season schedule as they now get ready to take on Canada’s National Women’s Team.

Ryan Donald, Bucks Head Coach and GM said it was an easy decision when they were offered the game.

“The opportunity to have a national team in your building and give that exposure to them and our program and our community is a no-brainer for us.”

Donald said the match will be a challenge but it will let them work on their game before the start of the season.

“It’s definitely different and it’s going to be a bit of a challenge there for our players in its own way. We’d like to structure it as much as we can and it gives the coaching staff an opportunity to work on systems, work on certain things that we’re really trying to finalize as we’re heading into our season.”

The Bucks will play the National Team on October 5th before playing their first regular-season game on October 8th against Trail.