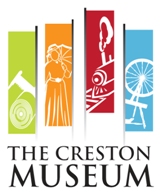 The Creston Museum is asking the community to help look at its collection through fresh eyes.

40 Years, 40 Voices: A New Look at an Old Collection is a project to mark the museum’s 40th anniversary, which will be marked on Sept. 12.

“We really want to gain some new perspectives and viewpoints to the stuff we’ve been collecting over those last 40 years,” says manager Tammy Bradford.

“We’re inviting people to come in who have not been directly involved in the museum before, asking them to go through our storage areas and exhibit galleries and find something, anything that resonates with them.”

Bradford says it could be something at triggers a memory or reminds them of an experience. They will then be asked to create some kind of presentation to tell other museum visitors what it is about that object or photograph that means something to them.

“It’s a community curated exhibit that will, we hope, present a whole bunch of stories and ideas that we have not talked about before,” Bradford says.

She says they are just in the early stages and now putting out a call for participants. But they do have a couple of people already lined up, including a man from Syria who was impressed with the museum’s 1947 Maple Leaf truck.

Bradford says another young woman was inspired by a Nickelodeon music box they’ve got and is working on a piece of art that will reflect the evolution of how we listen to music.

Bradford is hoping to have a variety of presentations: some might be an object with a label, others might be poems, or recordings of someone telling a story.

“It’s going to be fun,” Bradford says, adding that they are looking for younger people and open to newcomers to the community and to Canada.

“If this is your first experience with the Creston Museum, we hope it will be an opportunity for you to share your stories and get your voice heard and bring those new ideas and perspectives to the things we’ve always done.”

You can read Bradford at [email protected]