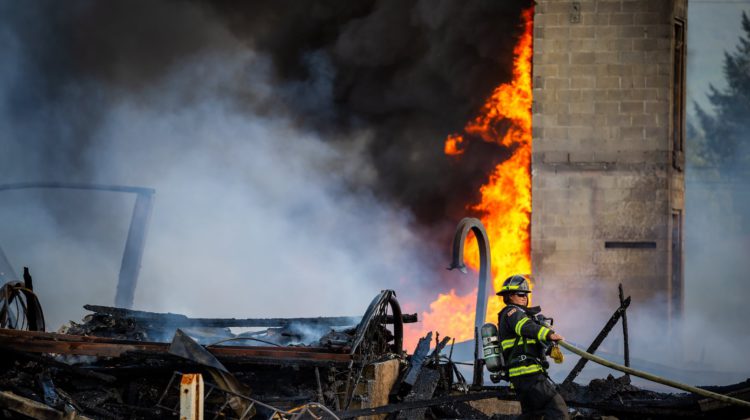 A Cranbrook firefighter responding to the devastating blaze Tuesday, September 1, 2020 which fully destroyed the old Legion Hall and Cranbrook's May May Chinese Restaurant. (Supplied by Chad St. Pierre)

Every firefighter in Cranbrook, along with RCMP, Public Works, BC Hydro, and Fortis BC responded to a large fire at the old Legion Hall and May May’s Chinese Restaurant on Tuesday, which fully destroyed both buildings.

The fire first broke out around 2:00 pm on Tuesday, as Cranbrook Fire and Emergency Service received many 911 calls as the blaze emitted a large column of smoke over the City. Initially, eight firefighters responded to the call, but every firefighter was paged to respond en route to the blaze. 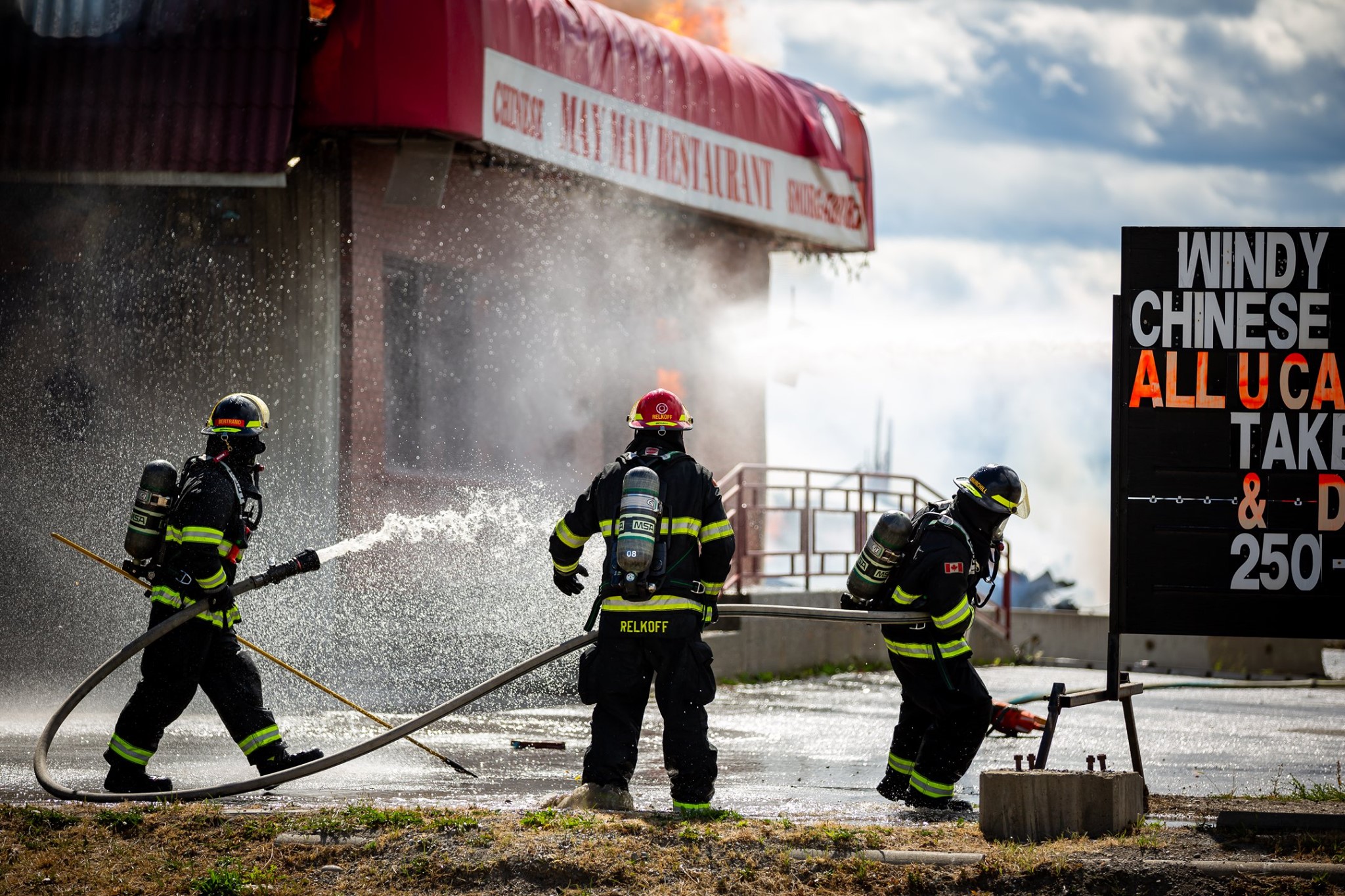 Firefighters responding to the fire at May May Chinese Restaurant on Tuesday, September 1, 2020. (Supplied by Chad St. Pierre)

“We did have a lot of trouble getting our members from home to the scene with all of the public interest in the fire, they clogged the streets and we had members having to run for blocks to get there because they just had to park, the traffic was jammed up and everybody wanted to come and see,” said Scott Driver, Director of Cranbrook Fire and Emergency Services. “Those very early stages, I would encourage people to try and stay away from those incidents because we do have staff trying to respond from all around the City.”

As the fire originated at the old Legion Hall directly off Highway 3 (Cranbrook Street), the flames quickly spread to the neighbouring restaurant to the north.

“We experienced very strong wind conditions yesterday (Tuesday) and that combined with the fact that the building was under renovations significantly contributed to the fire’s growth and it spread to May May’s Restaurant,” Driver told MyEastKootenayNow.com. “Unfortunately we weren’t able to stop the fire in between the two buildings and the fuel load from the first fire caused May May’s to catch on fire quite quickly upon arrival.”

Water being poured on May May Chinese Restaurant on Tuesday, September 1, 2020, to try and extinguish the flames. (Supplied by Chad St. Pierre)

Both buildings are a total loss. Driver said there was some additional fire exposure to the southwest towards the Eagle’s Hall, while William’s Moving and Storage also had minimal damage.

No one was injured, as Driver said nobody was inside the buildings. The cause of the fire is under investigation.

“We’re just heading into the fire investigation today (Wednesday) so no cause as of yet, but we’ve brought in the RCMP and the Fire Commissioner and we’re all going to meet.”

Driver thanked all parties that responded to the significant fire, noting that BC Hydro and FortisBC also responded in the early stages. Approximately 1,900 properties were without power during the fire. Driver said BC Hydro couldn’t isolate the two buildings and so they had to temporarily knock out power to the entire zone. Power was fully restored about an hour later. 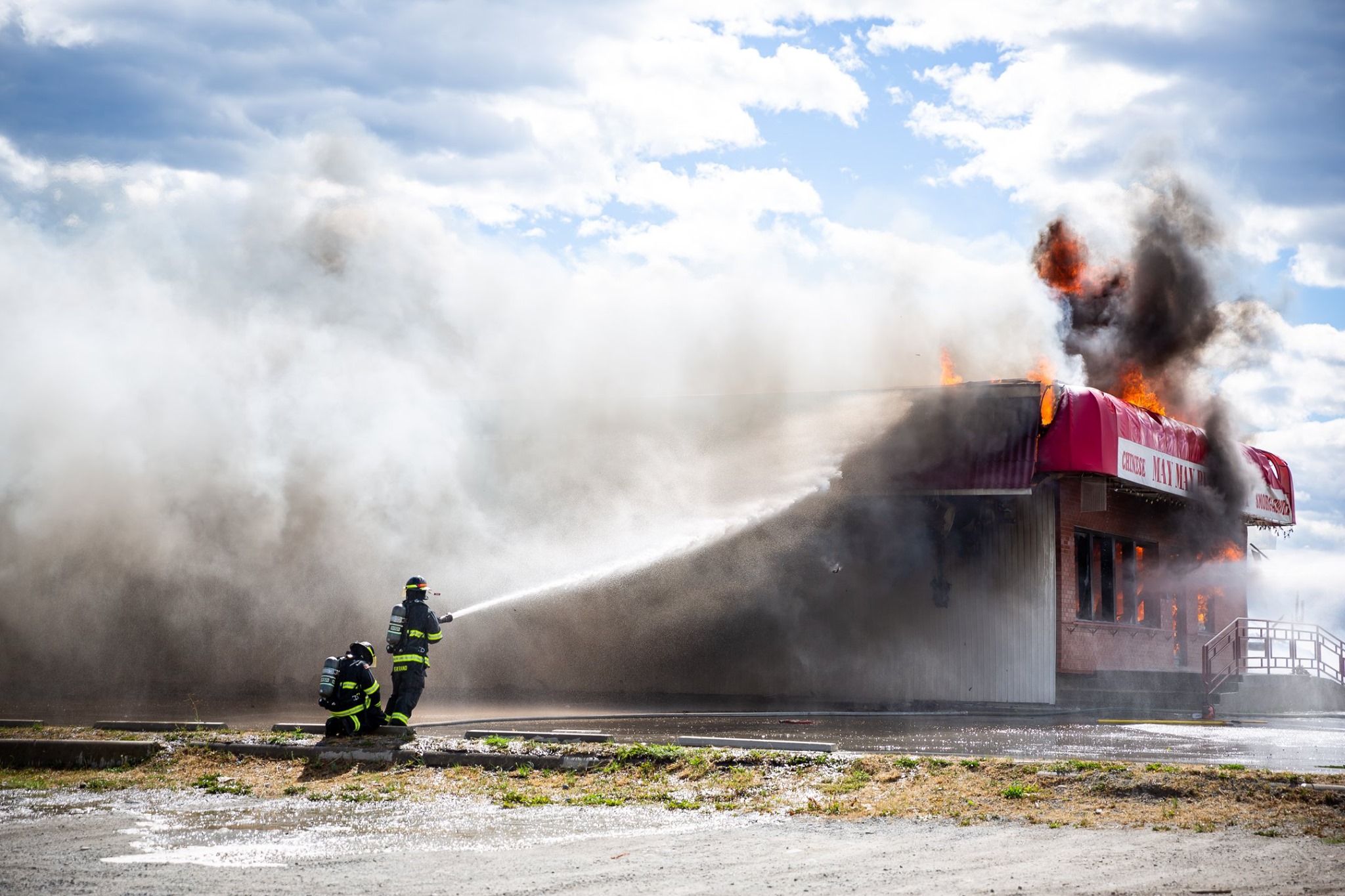 Firefighters responding to the fire at May May Chinese Restaurant on Tuesday, September 1, 2020. (Supplied by Chad St. Pierre)

“We had support from Public Works – showed up on scene to give us some help with traffic barricades and water supply and our fire apparatus so I’m very thankful for that,” added Driver. “The RCMP were heavily used in the incident and they did a great job of keeping the scene safe and keeping everyone away.”

Highway 3 was fully blocked to traffic for the majority of the afternoon as firefighters were using multiple hydrants across the road and nearby while mounting their full response to the flames. Driver said they monitored the fire overnight and are continuing mop-up operations, ensuring the flames were fully extinguished.

This was the third fire in four days for the Cranbrook Fire Department. Driver noted that they responded to a pair of bush fires behind Moir Park on Saturday that are believed to be human-caused while also responding to a human-caused vehicle fire on Monday before the significant blaze on Tuesday.

“We’ve had a very busy week this week and we’re just encouraging the public to practice fire safety.”

Driver said that although COVID-19 is the main focus for many, residents need to be vigilant about fire safety both inside and outside their homes. 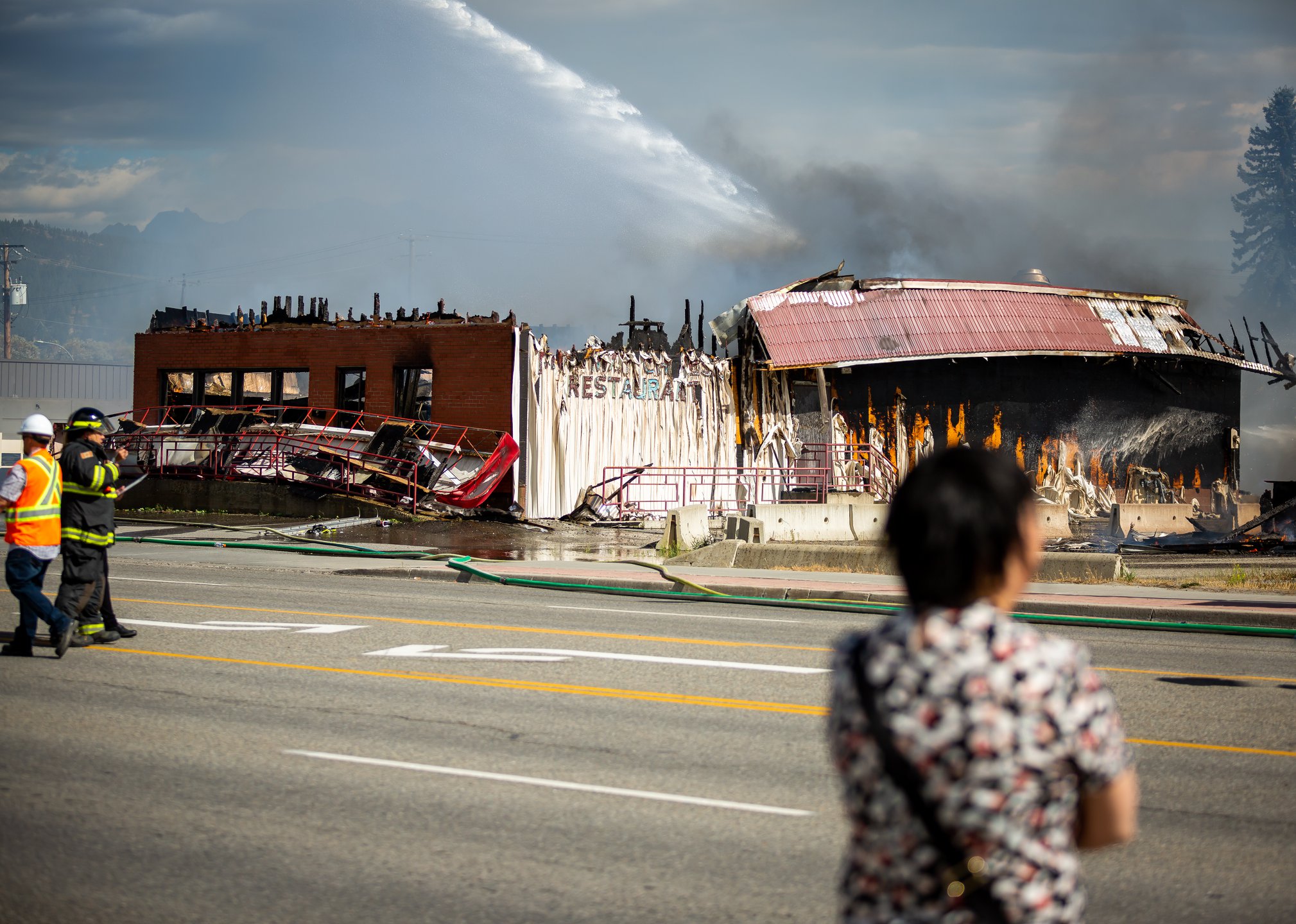 May May Chinese Restaurant was deemed a total loss on Tuesday, September 1, 2020, after the fire spread to the building from the neighbouring lot in the high winds. (Supplied by Chad St. Pierre) 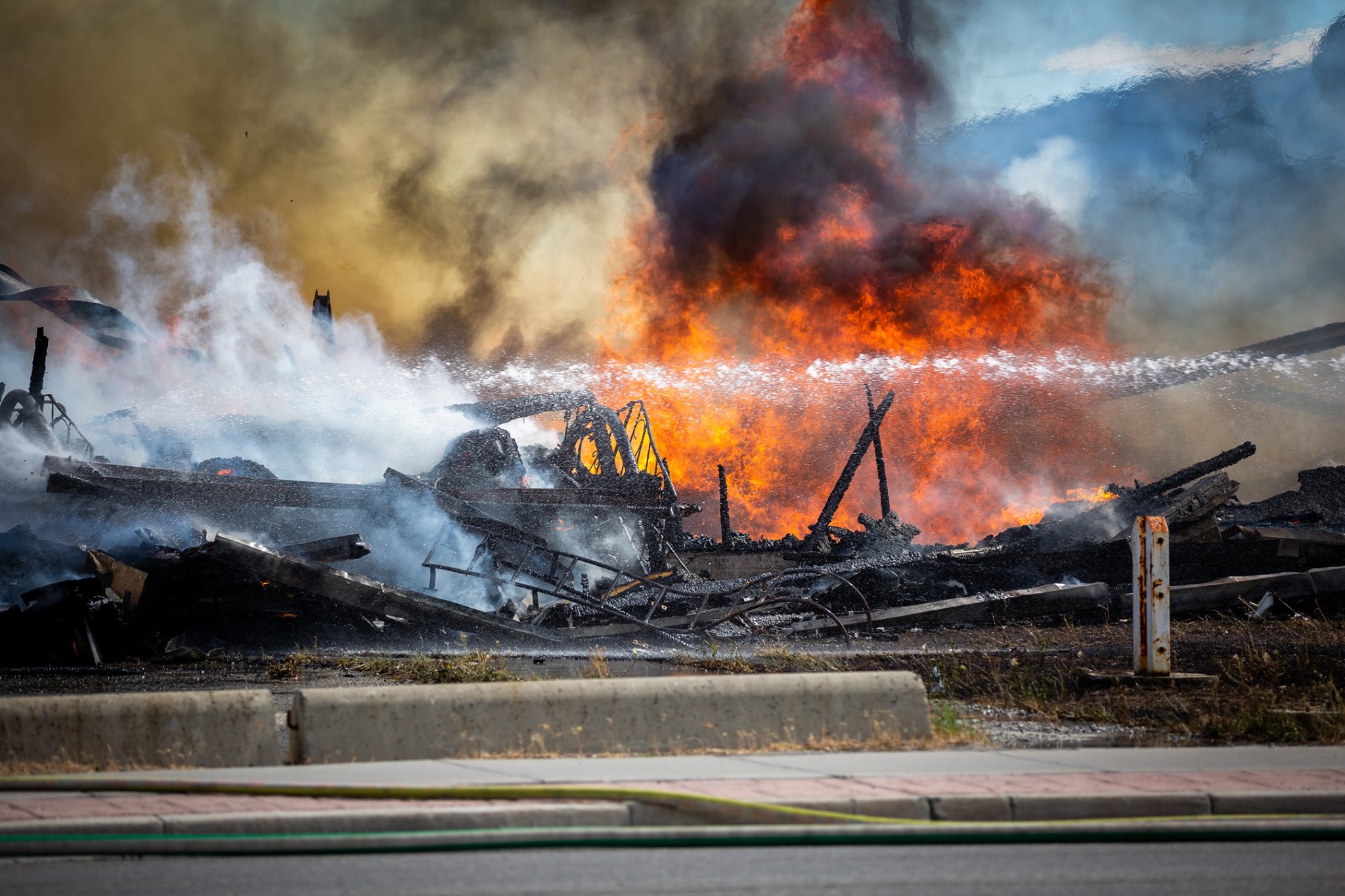 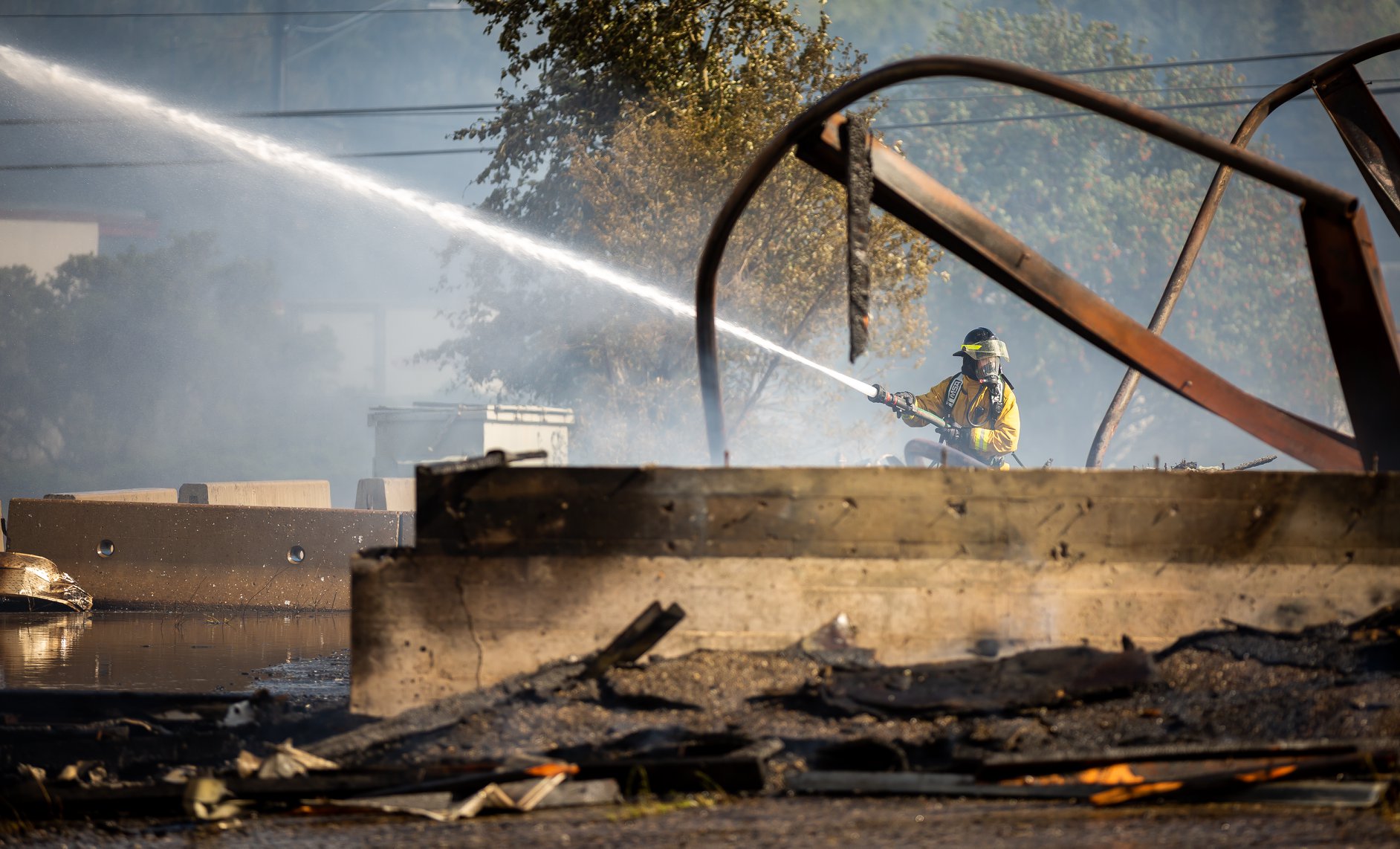 A firefighter sprays water on May May Chinese Restaurant Tuesday, September 1, 2020. (Supplied by Chad St. Pierre) 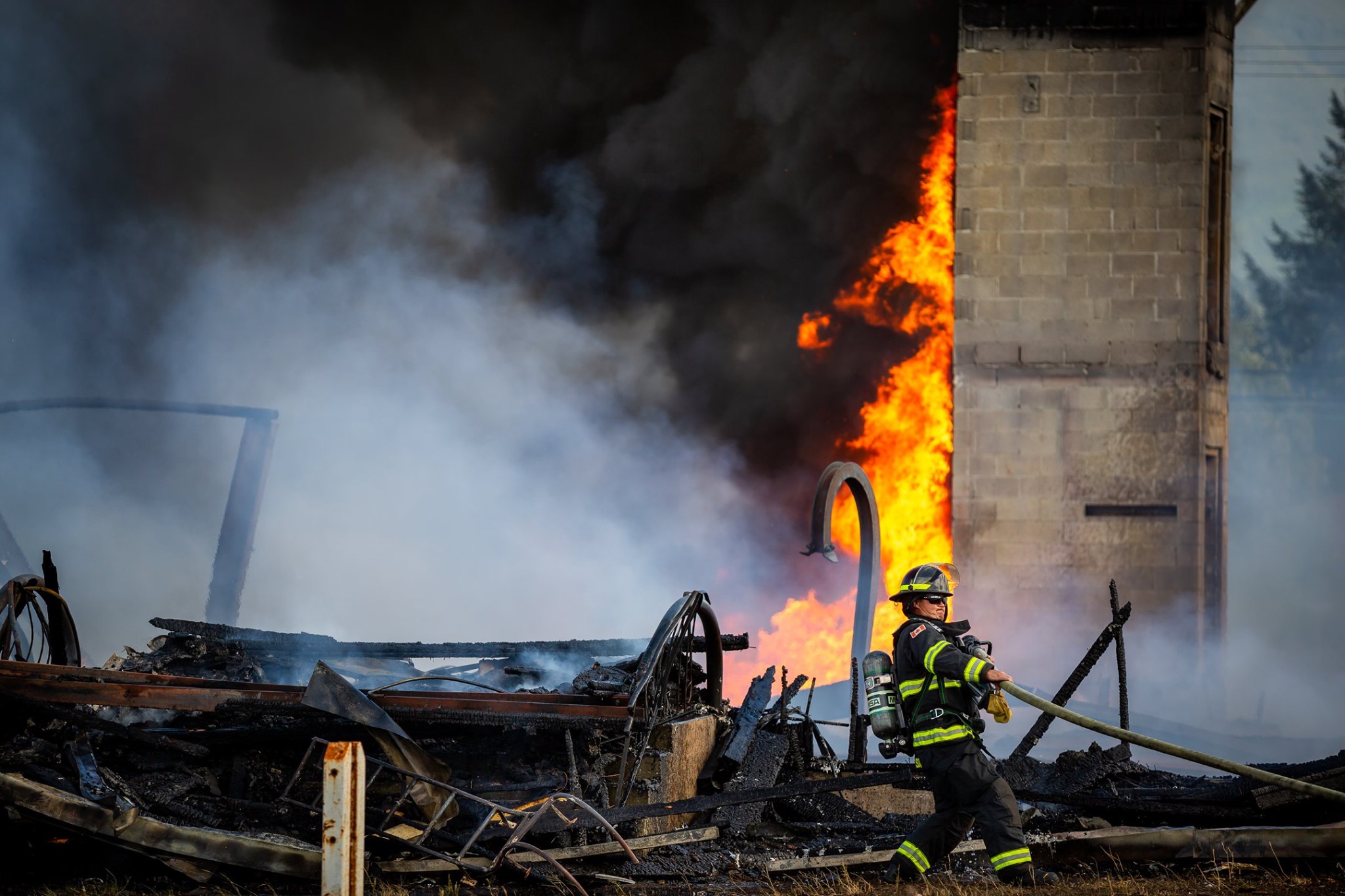 A Cranbrook firefighter responding to the devastating blaze Tuesday, September 1, 2020, which fully destroyed the old Legion Hall and Cranbrook’s May May Chinese Restaurant. (Supplied by Chad St. Pierre)

I would be remiss if I ended the day without a Thank You to my staff, who showed up well today. I must also send out our most sincere appreciation to the RCMP, BC Ambulance, Public Works, Hydro and Fortis. It’s always great to know we are surrounded by a great team