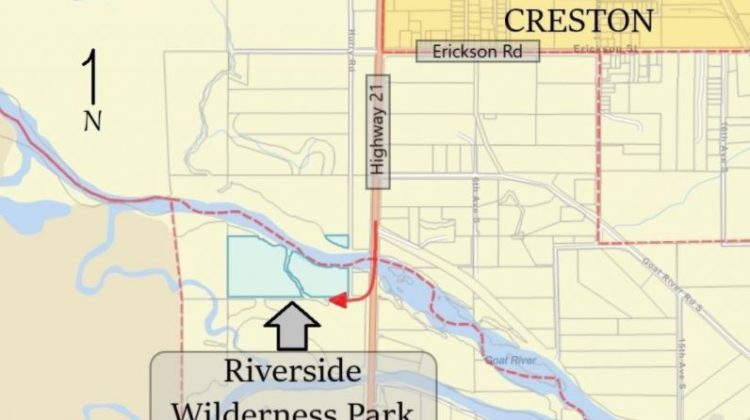 The Trails for Creston Valley Society’s September 8, 2020 Annual General Meeting shed light on one of their largest projects to date.

President and Chair Donna Carlyle said the Regional District of Central Kootenay is getting involved with Riverside Wilderness Park’s future.

“They have hired a consultant to look at a suitable location for the riverside park on Goat River,” said Carlyle.”Because of the location where we are at, there is concern with a neighbour. The RDCK was happy with our parcel [of land] and now, not so much.”

Carlyle said the consultant will speak to all levels of governments including the Lower Kootenay Band, the Town and the Society as well as the general public.  No timeline for these consultations has been set.

According to the Trails for Creston Valley Society, “Over 150 individuals, families and local businesses very quickly raised over $237,000 for TCVS to purchase this property for public recreational use.”

Options for Creston’s most popular and crowdfunded recreation site include the possibility of keeping the park where it is, or moving it.

“The RCMP investigated and they believe they know who did it, but they would not tell us,” said Carlyle. “They also said we could not charge them, but perhaps the [Agricultural Land Commission] could because they were fraudulently using the ALC’s name.”

Carlyle added that the neighbours next to the roadway which leads to the parking lot have a good relationship with the society, and that the society plans on building them a fence between their property and the road.

Other projects discussed during the meeting included the Old Ferry Landing, which has a problem with dumping. One member noted a burnt couch in the popular recreation spot as well as an influx of wooden pallets which leave dangerous and often hidden nails.

The Ka Papa Cedars Trail bridge will be getting a new roof as too much snowfall has made it dangerous in the winter.

As for more access to water and the lake, a member claimed the regional district had over-assessed what is available in the Creston Valley, including areas only accessible by boat.

The Trails for Creston Valley Society is a not for profit organization with 405 members who work closely with the RDCK, the Town and contributors like the Columbia Basin Trust.