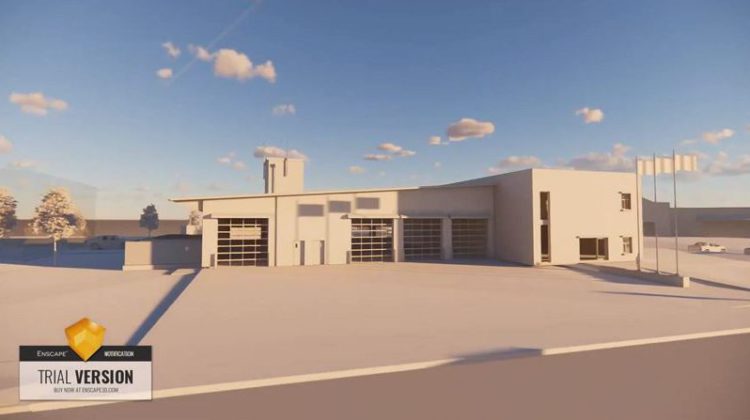 A revised 3D model of the Emergency Services Building shown at the February 25 TBAC meeting (Supplied by Bruce Mc.Farlane)

The Town of Creston’s new Emergency Services Building (CESB) will have a bigger price tag.

In a Committee of the Whole Meeting held on Wednesday, February 24th, Council was presented with an increase in the budget for the structure that will house BC Ambulance and Creston Fire Rescue from $5.4 million to $7 million.

This comes after the tendering process produced only two bids last summer, both far exceeding the proposed cost by almost double.

As a result, design changes were made to further reduce spending.  Firewise Consulting Director Ernie Polsom shared with the Technical Building Advisory Committee (TBAC) the stark reality of where the CESB project currently sits.

“Whatever the factors were, and there were many that went into this, the reality is that the approved budget simply will not cover this design,” Polsom told the committee on Thursday. “The second thing that is an absolute, is that the fire station needs to be replaced. That building simply hasn’t gotten any better, it has only gotten worse. It will continue to deteriorate, that need has not changed.”

Increased costs have primarily been attributed to skyrocketing material prices and a shortage of labour as a result of COVID-19.

“There have also been changes to the BC Building Code with respect to energy efficiency,” Polsom added. “The availability of materials has been severely affected, and there is no indication that this will be alleviated any time soon.” 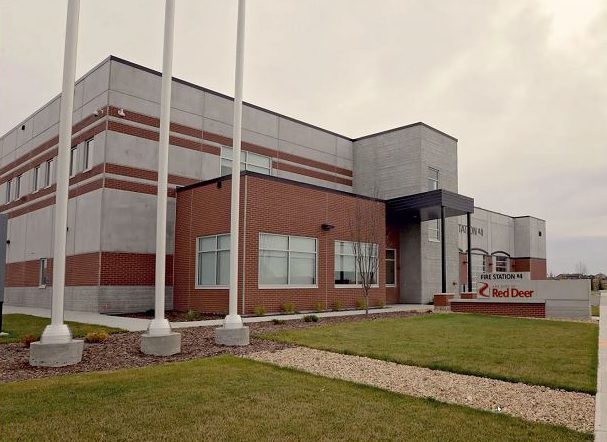 One of the proposed cost-saving measures is to use pre-cast concrete as seen in this recently Chandos-built Fire Hall in Red Deer Alberta. One member of the gallery, Keith Goforth, asked the TBAC why cost saving measures like this were not already considered. Supplied by Chandos Construction Ltd.)

With the $1.6 million budget increase and the recent hiring of Kelowna-based Chandos Construction Ltd. as the construction manager, Polsom said the project can still get done by the end of next summer.

“We can do what is called sequential fast track tendering,” said Mc.Farlane. “For example, we will tender the foundations first. While that work is starting to happen, we will continue on with the design and we would tender the structure. Then we would tender the finishes. Se we can keep moving progressively. We don’t have to wait and do it all at once.”

Ultimately the TBAC advises Council on how to proceed with the project. The Town said Council’s decision to forge ahead was based on the establishment that the project budget increase could be achieved utilizing surplus and reserve funds, with no increases to borrowing or taxation.

“When Council chose to cancel the tender process for the CESB back in August 2020, we knew that there was uncertainty in the market conditions created by the COVID-19 pandemic, and that there would be impacts to the overall project”, said Creston Mayor Ron Toyota. “This does not change the fact that we need to replace our fire hall. Our focus has always been, and continues to be, building  a facility for our emergency responders and the community that is based upon current service  levels and needs, and one that will fit with our emergency services now and into the future.”

The original CESB budget was set by the Town of Creston in 2016.

However, the project’s start date would be prolonged after nearly 60% of Creston voters rejected the Towns’ proposal to borrow $6.1 million in a December 2017 referendum.

The budget was then reconfirmed in 2018 through a Class ‘C” estimate, comparisons with recently built fire halls in British Columbia, analyses of construction costs in BC and the Altus Construction Guide.

In a second referendum paired with the municipal election in October 2018, the Town received voter permission to borrow a maximum of $4.5 million. Council also committed to contributing $1.0 million from reserves towards the project.

Following the land purchase for the CESB at 1505 Cook St in January 2020, the designs from Johnston Davidson Architecture were finalized and expected to be issued for tender in March 2020.

Due to the COVID-19 pandemic, there were delays in the tender process resulting in only two over budget tender bids in August 2020.

Council then directed staff to cancel the tender process for the CESB and evaluate project options, including the timeline and budget. After Council’s recommendation in October 2020 to issue a Request for Proposal for construction management services, they consequently made the recommendation to hire Chandos Construction Ltd.

The Technical Advisory Building Committee convened on February 25th, 2020, a day after Council made the decision to increase the budget by $1.6 million by dipping further into reserve and surplus funds.